The best road trips in the Algarve to escape the crowds

It’s hard to imagine a better place for a road trip than the Algarve, with its year-round sunshine, cliff-backed coastline and hill-covered interior dotted with peaceful market towns and riverside castles.

The main thoroughfares here are generally in good shape, though with curvy, narrow roads and wandering livestock, it’s best to take things slowly. Enjoy the ride with these five top road trips through the Algarve.

Make the most out of every adventure with help from our weekly newsletter delivered to your inbox.

Sea-gazing in the central Algarve

You’ll visit some of Portugal’s prettiest beaches as you wind your way past the Algarve’s most famous towns. Though you’ll need to travel along inland highways (like the N125) to get between key places along the route, this road trip involves frequent detours down to the coast for some rewarding beach time.

Just past the settlement of Vilamoura, you’ll reach your first seaside expanse: the golden sands of Praia da Falésia, where it’s easy to escape the crowds along 6km (3.7 miles) of shoreline. Further west, bypass the crowded beaches of Albufeira and stop at the hidden cove of Praia do Ninho das Andorinhas, just west of town.

The scenery just keeps getting better as you continue to the magnificent beach of Praia da Marinha and the sea caves of Benagil (accessible on boat tours from Carvoeiro). You can stretch your legs on the Percurso dos Sete Vales, a clifftop walk with panoramic views over rock formations sprouting dramatically from the sea. Take a break from the beach in the winding lanes of Ferragudo, a former fishing village on the Rio Arade.

The pretty town of Lagos makes a scenic ending to this seaside road trip, though if time allows, try to squeeze in a visit to the hidden wonders south of town, including the craggy rock face of Ponta de Piedade – a memorable spot to watch the sunset.

Markets and mountains of the hinterlands

Best road trip for getting off-the-beaten-path

The hinterland presents a very different vision of the Algarve. In place of beaches and crashing waves, you’ll see olive groves, forested hillsides and tiny rural villages. As you leave the coastal town of Portimão, you’ll also experience some surprisingly lofty views on the winding drive up to the pretty mountain hamlet of Monchique. Nearby you can reach greater heights atop 902m (2959ft) Fóia, the Algarve’s tallest peak.

Heading west along eucalyptus-fringed roads, you’ll reach the riverside town of Silves, home to the Algarve’s most impressive castle, as well as the waterfront mercado municipal, where you can gather market-fresh fruit and vegetables for the day’s picnic. Further along, you’ll pass Alte and Salir, two fountain- and flower-filled villages nestled in the highland scenery of the Serra do Caldeirão. At the trip’s end, you’ll arrive in vibrant Loulé, which is famed for its architecturally striking market, which is at its liveliest on Saturdays.

The southern border of Portugal skirts the Rio Guadiana, the centuries-old dividing line between the Algarve and Andalucía. On this borderlands drive, you’ll see historic riverside settlements and idyllic landscapes unchanged by time, as well as dramatically set reservoirs giving new life to once barren terrain.

As you leave the riverside town of Vila Real de Santo António, you’ll soon find yourself in a scenic nature reserve of marshland, creeks and salt pans that harbors a wide variety of bird life. Keep an eye out for flamingos, black-winged stilts and many duck species – the Romans called this waterway Flumen Anas, meaning "river of ducks". Nearby, you can admire the view from atop the Castelo de Castro Marim, a former Knights Templar stronghold that provides eagle’s nest views over the Spanish frontier.

Continuing north you’ll pass the reservoirs of Beliche and the dragon-shaped path of the Odeleite river, both with impressive miradouros (lookouts) taking in a wide expanse of sparkling blue. Afterward, follow the sinewy road along the river, stopping for a look at the Roman ruins near Laranjeiras before arriving at Alcoutim. Here you can visit yet another 14th-century castle and cool off with a swim off Praia Fluvial do Pego Fundo, an artificial beach set on the Ribeira de Cadavais, a tributary of the Guadiana that flows just west of town.

Journeying into the past in the eastern Algarve

The less-visited eastern corner of the Algarve has wide-ranging appeal, from excellent wildlife-watching to historic sites, along with oceanside retreats that are perfect for doing nothing at all. The trip starts off with a bit of the latter on the beach on Ilha de Faro, a long sandy island reached via a one-lane bridge near the airport.

Skirting back around the city, it’s a short drive past sunbaked farmlands to Milreu, where you can see the ruins of a villa, a temple, a mausoleum and other 2000-year-old fragments from the Algarve’s most important Roman site. Up the road, have a wander through the Versailles-inspired gardens of the Pousada Palácio de Estoi; if your budget allows, you can even stay the night in this 18th-century rococo palace.

Heading back to the coast, plan on lunch in Olhão, a seafood-loving town with the Algarve’s biggest and best fish market. Starting from Olhão, you can head off on a boat trip through the Parque Natural da Ria Formosa, an 18,000-hectare (44,479-acre) wetland reserve that’s a major stopover for migrating birds such as flamingos and the purple swamphen.

In Tavira, you can journey once again into the past, wandering the cobblestone old quarter, learning about life under Islamic rule at the Núcleo Islâmico, and taking in the views over the riverside atop the Castelo, a fortress with roots that pre-date the Romans.

Driving along the edge of Europe

Take slow, ocean-hugging roads to reach the Algarve and you’ll be rewarded with some of Europe’s most dramatic scenery. Leaving Lisbon, drive to tiny Setúbal and catch the vehicle ferry to Troia, keeping an eye out for dolphins along the way. As you reach the Alentejo coastline, stop in at the charming waterfront towns of Vila Nova de Milfontes and Zambujeira do Mar for breezy views and superb seafood.

As you cross the narrow Rio Seixe, you’ll reach the northernmost piece of the Algarve, and you can beach-hop your way down the province, stopping at the wild, cliff-backed shores of Odeceixe, Monte Clérigo and Vale Figueiras.

Civilization returns in Carrapateira, with its surf camps and budget-friendly B&Bs. A few dozen beaches further along the coast and you'll arrive at Sagres, an easy-going village and famous surf hub near the Cabo de São Vicente, Europe’s southwesternmost point. Celebrate the journey’s end with a sundowner watching the sunset 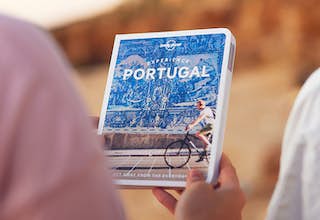 Lonely Planet’s Experience Portugal is your guide to unforgettable experiences and local surprises. Listen to authentic fado in Lisbon, explore the colourful palaces of Sintra, feast on the freshest seafood in the Algarve - all guided by local experts with fresh perspectives.