The 7 best road trips in Vietnam weave past mountains, jungles and beaches

Long and sinuous, like the mythical naga serpent, Vietnam curves around the eastern shores of mainland Southeast Asia, stretching all the way from China in the north to Cambodia and the Mekong Delta in the south. Its twin megacities – Hanoi and Ho Chi Minh City – are divided by 1137km (707 miles) of mountains, jungles, paddy fields, beaches and historic sites. In other words, this is perfect country for road tripping.

The trip between Vietnam's northern and southern capitals is just of many epic road trips that call out to adventurers on four, or, more commonly, two wheels. With more than 61 million motorbikes on Vietnam's roads, intrepid bikers will find themselves in good company as they explore the country’s wonderfully diverse landscapes, with ample repair shops, gas stations and food stops along the way.

Whether you’re thinking of hitting the road by car or by motorbike, here’s our pick of Vietnam’s best road trips, from coastline freewheeling to dizzying spirals into the mountains of Vietnam's wild northwest.

Scout new ways to explore the planet's wildest places with our weekly newsletter delivered to your inbox.

Test your reflexes on the winding road to Hai Van Pass

Before the Hai Van Tunnel was completed in 2005, just the thought of enduring the hairpin turns and blind corners of the Hai Van Pass was enough to send shivers down the spines of bus passengers traveling between Danang and Hue. Now with significantly less car traffic, this short but stunning ride is a manageable, memorable trip even for the novice driver.

Translating as ‘Ocean Clouds’ in Vietnamese, the Hai Van Pass is bordered by jungle-clad mountains on one side and cliffs plunging down to the East Sea on the other, a dramatic setting that has made this road one of the most Instagrammed highways in the world – with a whopping 4298 pictures per mile!

Stop at the mid-way point for a Vietnamese-style iced coffee and admire the Indochina-era Hai Van Gate and the remains of several French fortifications. While the pass officially ends at the windswept Lang Co Beach at its northern end, most travelers continue for another hour or so to reach the former imperial city of Hue to gaze at its palaces and timeless tombs.

The soaring peaks and plunging valleys of Vietnam’s northernmost province are best enjoyed at a leisurely pace, with plenty of stop-offs for revitalizing dips in waterfalls, roadside snacks (nothing keeps energy levels up like dried buffalo), and to snap photos of the rice and corn terraces tumbling down the valley’s steep hillsides. Start the adventure in Ha Giang city, the gateway to a land of conical, forested peaks plucked straight from an antique scroll painting.

Ha Giang means 'water and mountains' in Vietnamese, and you’re never far from either when you tackle this loop through Yen Minh, Dong Van and Bao Lam, with gurgling streams and cascading waterfalls forming a major part of the scenery. Winding its way through communities of at least 10 different ethnic minorities, this rewarding multi-day drive offers plenty of opportunities for side trips and activities, including trekking, river-boating and caving.

The Ma Pi Leng Pass is hands-down the most scenic section of the drive, with jagged mountains surrounding the emerald Nho Que River. Remember to factor in a half-day for a quiet boat trip with a spot of swimming in its enticing waters.

The drive from Cao Bang to the churning Ban Gioc Waterfall, which straddles the China-Vietnam border, takes adventurers through some of Northern Vietnam’s most pristine pastoral terrain. Lush farmlands, stilt villages and crystal clear lakes are all on the itinerary. However, for driving enthusiasts, nature's creations might be outdone by a man-made wonder: the 3.5km-long Ma Phuc Pass, with its seven writhing bends offering gorgeous views of the terraced fields below.

For more natural highlights, consider a stop-off at the vast, stalactite-filled Nguom Ngao Cave, which extends for several kilometers underground, but save plenty of time for the road trip’s primary focus. Fed by the Quay Son River, the Ban Gioc Waterfalls are located partly in China and partly in Vietnam and they thunder dramatically over a series of greenery-draped shelves.

Take in the falls from the viewing platforms or hop on a bamboo raft for a closer look at the impressive cascades, which fall over 30m (98ft). While worthy of being tackled as a standalone trip, this route is also a popular add-on to the Ha Giang Loop.

From the cool climes of the highlands around Dalat to the sunny beaches of Nha Trang, this short and simple road trip is all about changing scenery and microclimates. Get an early start so you have time to appreciate the hilly terrain en route and the coastal views near the end of the drive.

Begin in the hillsides around Dalat, founded as a salubrious hill station where French colonists came to escape the oppressive heat of Saigon (now Ho Chi Minh City). This is a very unique area of Vietnam, where the scent of pine trees hangs in the air and farms cultivate strawberries, coffee and flowers instead of rice.

As you descend from the mountains and the humidity begins to return, things start to feel more conventional. The paved QL27C road unfurls around hills and snakes through tiny villages all the way to the coast, where a dip in the turquoise waters of Nha Trang Beach makes for a worthy close to this trip.

Ho Chi Minh City to My Tho

The rice paper-flat Mekong Delta doesn’t get much road trip love because its every-shade-of-green rice fields can turn from mesmeric to slightly monotonous as the miles mount up. However, once you get outside of sprawling, smoggy Ho Chi Minh City, you’ll see the urban shrubbery give way to majestic palms, lush banana trees and glimmering waterways amongst the emerald rice paddies.

While the scenery here is certainly evocative, the best part of driving in the Mekong Delta is taking your foot off the gas and losing yourself in the tiny riverside laneways and byways, where life moves at a very different pace to the buzzing streets of HCMC.

When you eventually make it to My Tho – a town famed for its chewy noodle, pork and shrimp soup – further cultural experiences await, with the flower farms of Sa Dec a short drive to the west and Can Tho, home to the largest floating market in the Delta, located to the southwest.

Isolated from the mainland for years, the Con Dao islands are one of Vietnam’s natural wonders. Con Son, the largest and only inhabited island of the archipelago, has just one main road stretching across its length – a motorcycle trip is not only the best way to see the rural splendor of the island, but also the best way to hop from one gorgeous deserted beach to the next.

Start at Dam Trau, a long stretch of beach dotted with seafood shacks near the airport, and wind your way past forested hillsides, a French colonial-era prison, and a string of glorious beaches that only appear during low tide, ending up at Ben Dam where ferries from the mainland come and go. Take things slowly over a morning or afternoon and bring your swimming costume.

There are several different routes between Vietnam’s two biggest cities, depending on whether you like beaches, mountains or smooth highways, but for the best balance between driving time (about two weeks) and excellent scenery, hit the Ho Chi Minh Highway, part of which was once used to transport soldiers and supplies during the Vietnam War.

After exiting busy Ho Chi Minh City, follow the road along the Truong Son mountain range as it snakes its way past sleepy hamlets, where the smell of coffee from nearby plantations hangs thick in the air. This barren plateau gives way to forested mountains as you reach Central Vietnam, considered the most scenic stretch of this epic road trip.

Adventurers will want to stop at Phong Nha Ke Bang National Park, home to the world’s largest cave, and Cuc Phuong, Vietnam’s oldest national park, located in the Red River Delta, before joining the throng of traffic on the ancient streets of Hanoi.

This article was first published May 14, 2021 and updated 2 days ago 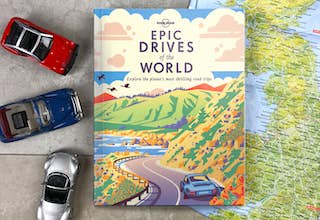 Buy Epic Drives of the World

This book showcases 50 of the greatest road trips on Earth, from classic routes in America, Australia and Europe, to incredible adventures in Asia and Africa.

Buy Epic Drives of the World
View all stories